What do Texas Gun Sense, Moms Demand Action, Mayors Against Illegal Guns and other Bloomberg-funded anti-gun, anti-Second Amendment groups have in common? Lying and deception are their modus operandi. In some ways it is understandable since the facts do not support their agenda, but one would have hoped that honesty and integrity would have been of greater value than a political goal.

The new anti-gun group in Texas headed by Andrea Bauer calls itself Texas Gun Sense. Unfortunately, there’s nothing new about their message. It’s the same lie that Bloomberg organizations have been unable to sell to the American public for years. Their methods are also identical; tell outright lies, half-truths and do not dare deal in facts.

As did President Obama, Texas Gun Sense launched into its anti-gun lies even before the families of the victims of the mass murders at the Umpqua Community College had laid their loved ones to rest. As a political and legislative activist for over 35 years, I understand the desire to achieve one’s political goals. As a husband, father and simply a man who understands grief, I am appalled that Bauer’s Texas Gun Sense could be so callus, uncaring and disrespectful of the families’ time of morning. That speaks volumes about Texas Gun Sense and its leadership. 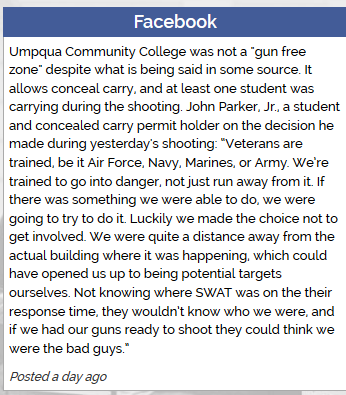 Texas Gun Sense posted on its website a copy of a post it made on its Facebook page claiming that the Umpqua Community College was not a “gun free zone” as others have claimed. The post goes on to allegedly relate the story of a UCC student in a different building who was armed with a handgun, but chose not to go to the aid of fellow students for personal safety reasons. The presence of an armed student has not been confirmed as of the writing of this article, but the Internet has reported that such a student was present in a different building, but he was told not to intervene. Regardless of the facts about an armed student in another building, the Texas Gun Sense post/contention is false.

Oregon law prohibits the carrying of firearms on college campuses, but persons holding a license to carry a concealed handgun are exempt from this law. However, Umpqua Community College has a rule against carrying firearms without written authorization from the school. Thus, UCC was a “gun free” zone not by statute, but by rule. Texas Gun Sense’s statement that UCC was not a “gun free” zone is blatantly false.

UCC expressly prohibits the possession of firearms on campus, unless pursuant written authorization. Student Code of Conduct Section 721.3(19) that reads as follows:

The following actions and/or behaviors are the types of misconduct for which students may be subject to disciplinary action.

Possession or use, without written authorization, of firearms, explosives, dangerous chemicals, substances, or any other weapons or destructive devices that are designed to or readily capable of causing physical injury, on College premises, at College-sponsored or supervised functions or at functions sponsored or participated in by the College.

Take Anti-Gun Rhetoric With a Grain of Salt

The long-standing track record of anti-gun groups is one of lies, half-truths and deception. These tactics did not start with Bloomberg’s organizations; he followed in the footsteps of Sarah Brady’s various anti-Second Amendment groups. Whenever one hears or reads a statement by any of these anti-gun groups, be sure to do some fact-checking. It will not take much effort to uncover the truth.

Sadly, when the facts do not support one’s desires and goals, some people are willing to resort to lies. So it is with Texas Gun Sense.